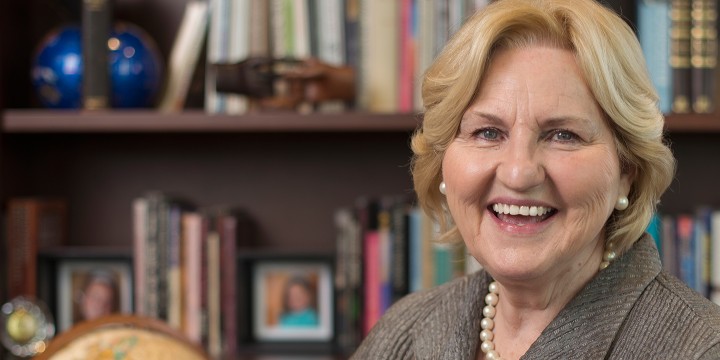 To serve God and my country,

To help people at all times,

And to live by the Girl Scout Law.”

I remember how proud I felt when I wore my Brownie and later my Girl Scout uniform and recited the pledge. Something about saying that promise made me feel like I belonged.

At my church growing up we recited no creed but we were bound by a set of beliefs that were preached and sung. I knew I belonged to that intergenerational group at church as well.

Today it seems our culture is unsure what it believes. We don’t know what we would die for. Our churches are unhealthy because they lack clarity in their beliefs. Perhaps we are confused because we are called to believe and align ourselves with so many things: Pledge this! Believe this! Buy this! Commit to this! Sign this! How do we choose?

The early Church was in a similar situation. There were many voices calling for attention, including the Gnostics and the Marcionites within Christianity and the Pagans with all their varieties of belief. Illiteracy was at a high rate so people needed to have something they could memorize and understand to summarize their faith.

In the 1st Century, Christians confessed that “Jesus is Lord” and tried to live this out as best they could. In fact, this phrase is the most universal statement of Christian belief. Christians have used it for centuries to identify each other in times of persecution. Today they are the same words whispered in secret church meetings in persecuting countries. In my lifetime, I believe such whispers of unknown Christians transformed into a blast that crumbled the Berlin Wall.

Marcion did not believe that Jesus was the Messiah as written by the prophets. He also taught that the Old Testament was not Scripture as well as other views that limited Scripture. Because of this and other challenges to the faith, Roman Christians around the year 180 A.D. developed the first part of the Apostles Creed that affirmed the divinity of Jesus. Then in the 2nd and 3rd centuries when people were coming back to the Church after having denied the faith during the times of persecution; the part about the forgiveness of sins was added. This was a very difficult time for the church and forgiveness was needed in abundance.

In the fourth and fifth century the North African Christians were struggling with exclusion or inclusion hence finally the addition of the church Universal. Also from Gaul came the section of Jesus descending into hell. The church came together from around the Christian world to clarify what they believed, and what they did not believe, in the creeds.

The Apostles Creed has stood as a definition of the Christian Faith since that time, and many have been asked to recite that creed prior to baptism. In our churches today I am glad we ask people to give their testimonies prior to their baptisms, and this serves a similar function to confirm belief.

Keith Drury’s book Common Ground influenced me well and has provided an excellent guide in the further study of the Apostles Creed and the depth of its meaning. Here is the creed:

I believe in God the Father, Almighty, Maker of heaven and earth:

And in Jesus Christ, his only begotten Son, our Lord:

Who was conceived by the Holy Ghost, born of the Virgin Mary:

Suffered under Pontius Pilate; was crucified, dead and buried: He descended into hell:

The third day he rose again from the dead:

He ascended into heaven, and sits at the right hand of God the Father Almighty:

From thence he shall come to judge the quick and the dead:

I believe in the Holy Ghost:

I believe in the holy catholic church: the communion of saints:

The forgiveness of sins:

The resurrection of the body:

And the life everlasting. Amen.

What if we returned to the creed with more intentionality? What if we countered the trend toward shallowness by using a tried and true creed to center us on the non-negotiables? In a world where so many are unsure what we believe and people don’t know what we would die for, what if we stated the core essentials clearly and confidently in the creed? Using such words in a heartfelt way with a depth that reaches to the soul of who we are and what we do could clarify the muddy waters of belief for us.

If we hope to transform our communities we need to be clear in our beliefs. The transformation of communities is not just a sum total of good deeds. It must be truth-driven. It must wed the power of the Spirit of God that does the total transforming. For true transformation to take place our work must point to the truly holy one in order to offer true hope.

ALL - An article on "Spirit-filled believers" from Jo Anne Lyon

I can’t get away from the prophetic words of Joel that are repeated by Peter at Pentecost: “I will pour out my Spirit on all people.”

Church leaders learn before long that attendance is only meaningful if you can drive engagement.

Learn about our core values and beliefs. These terms are descriptive of who Wesleyans are and why they do what they do...

Acts 2 in an Iowa Firehouse #MadeNewGatherings