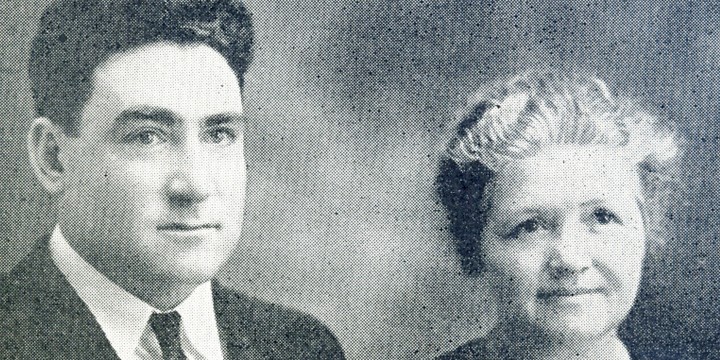 Francisco and Nettie Soltero were largely responsible for opening the country of Mexico to the mission field for the Pilgrim Holiness Church. Francisco was born in Mexico but moved with his family across the border to New Mexico when still a young boy. He was converted and called to preach at the age of 13. Later, he attended Kansas Bible College and it was there that he first met his future wife, Nettie Winans who was as a faculty member at the college. After Francisco and Nettie married in August of 1918, they served as missionaries in a New Mexico mining town for a time but began to sense God’s call to Mexico. Their opportunity came when Seth C. Rees, who was the leader of the California Pilgrim Church, asked them to serve as missionaries to Mexico on behalf of the Pilgrim Church. Seeking God’s direction, they felt led to settle in the city of San Luis Potosi, one of the six largest cities in Mexico, arriving there on January 27, 1920.

At first, they held services in the house they rented. Eventually they found a hall which was conveniently located in front of the streetcar station. Those who were waiting for a car would now be exposed to the Gospel by hearing the singing and preaching coming from the hall. This was their church home for the next 7 years. The work was slow to grow at first because of the hostility of the people towards the Gospel, but eventually a Sunday School of 35 members was organized. Services were also held in a jail house. It was there that an infamous and much feared drug addict, who often attempted to disrupt the worship, was converted and called to ministry. As the work grew, several additional workers came to join the Solteros including the True sisters from California.

In 1921, the Solteros were asked to minister to the Otomi tribe, native Mexicans who were often abused and ostracized by the more privileged classes. Francisco along with another missionary traveled three days by horseback to reach the Otomi people in the town of Potrerillos. They ministered day and night to the spiritually hungry people. After three days, 50 Indians agreed to help care for a missionary if one was sent to the area. The True sisters ministered there for a short time but were forced to leave because of severe persecution. Their lives were threatened on many occasions. To make matters worse, the Catholic priest for the area was greatly opposed to the Protestant presence and did whatever he could to foment discord among the people towards the missionaries. The indigenous people who gave their lives to Christ were also severely persecuted. There were some who were pursued and stoned often barely escaping the mobs of people who did not welcome the Gospel message. There was also much alcohol abuse in the area which further escalated tensions. Physical dangers such as wild animals, snakes and illness such as malarial fever were a constant presence as well but nothing deterred the Solteros from spreading the Gospel.

Education was very important to Francisco and Nettie. They established a Bible school in San Luis Potosi to train all the newly converted people. They also fostered and educated children in their own home. In 1927, they rented a larger home and took in 12 native Mexican boys, mostly Aztecs. The boys were enrolled in public school during the day and taught Bible and music in the evening. Nettie was responsible for much of the educating having begun her teaching career in Kansas at the age of 15.

After 12 years, the mission headquarters and school were moved to Valles where the headquarters remained. Because of governmental religious restrictions, the school was moved across the border to Laredo and then to San Antonio, Texas in 1934. The educational program at the Bible school provided students with six months of schooling and six months of practical ministry experience in Mexico. The Solteros, especially Nettie were continually training workers. Summer institutes were held so that students who could not attend throughout the year had opportunity to be educated. Of the students who went on to graduation, many became pastors, Sunday School superintendents and teachers. In 1943, the school was forced to move once again back across the border to Valles because of war-time emigration restrictions that prevented Mexican students from crossing the border.

In 1957, there was an outpouring of grief when Nettie passed away after a short illness. Her death was a huge loss. She had been responsible for much of the training and was deeply devoted to the children she cared for and educated. In addition, for many years, she served as the only office worker in the mission station, and had become a proficient linguist and writer, editing the monthly Spanish periodical called “El Peregrino Evangelico” (The Evangelical Pilgrim).

Francisco continued on with the work and remarried in 1964. By the time he retired from active missionary service in 1970, there were 80 organized churches, 40 preaching points, 6,035 members and 10,038 Sunday School students in Mexico. He passed away at the age of 85 in 1977. The Solteros accomplished so much for the Kingdom because of their devotion to God and to the people of Mexico. Having weathered many challenges and adversities, they lived by the verse that Nettie often quoted, “Hitherto hath the Lord helped us”. (I Sam. 7:12).