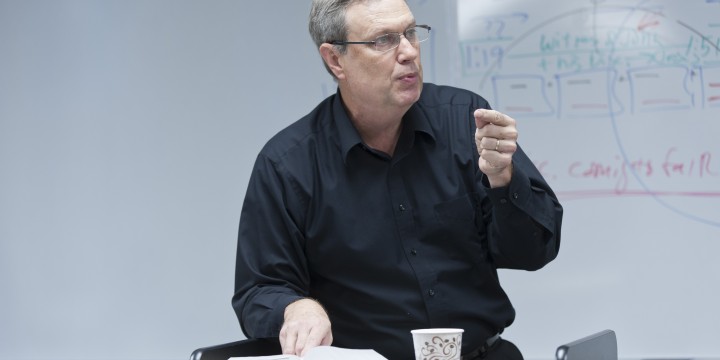 I want to talk about three very different kinds of waves I see radiating from John Wesley. Here I am not trying to map Wesley's outflow comprehensively, or with historical precision. I want to talk about three waves emanating from Wesley. . . as I myself have experienced them. One wave is largely past, the second is currently still cresting, and the third has recently captured me (though it is not as widely recognized or firmly embraced as I think it should be).

I was born and raised deep within the first wave I want to identify, the Wesleyan Holiness Movement in North America. My childhood memories are filled with camp meetings and revival services, along with the colorful men and women who led them. I easily remember the aroma of the oat straw layered around camp meeting altars to cushion the knees of those seeking God in prayer. These are priceless memories.

We knew who we were. We believed ourselves to be the true followers of John Wesley. We knew that God was calling every Christian to experience his or her own personal Pentecost: the baptism of the Holy Spirit after the pattern of Acts 2, in a "Second Definite Work of Grace," entered into by the total surrender of one's heart to God. We knew that through this specific act of complete self-giving, one would be baptized with the Holy Spirit, and that at that very moment two supreme graces would be ours, two blessings towering above all other gifts God could impart: namely, purity of heart and power for service. Put simply: purity and power.

I am not interested today in exploring why this wave, the American Holiness Movement, seems to have faded so dramatically (especially over the last two generations) after so promising a beginning in the mid-to-late 1800's and early 1900's. I have come to believe that its fundamental problem was not sociological, as some suggest, but theological and biblical. My informed suspicion is that by naming power and purity as the highest priorities of the Christian life, it was actually aiming just a bit too low, and missing out on what our supreme aspiration ought to be. But more on that later.

A second major wave (in my experience) emanating from John Wesley is quite different from the first. It is the tidal wave of scholarly researchers poring over every nook and cranny of the writings of John and his brother Charles, straining to identify every imaginable stream of influence flowing into and out of them. This second wave, beginning in the 1950's, appears still to be rising, as evidenced by the mighty surge of books, articles and journals, specialized libraries and collections, doctoral programs and their dissertations, conferences and scholarly societies devoted to examining all things touching the Wesley brothers.

While I am not the one to map out all of the currents in this tidal wave of research, I do want to identify two outcomes that have impressed me, again as one raised within the American Wesleyan Holiness Movement.

One outcome, as I see it, of the scholarly rediscovery of Wesley is the search for the center of Wesley's theology, for the essence of Wesley's spiritual genius. Is there some cluster of elements that capture the inner mechanism of his thought to form a set of "Wesleyan Distinctives?" Or put another way, what does it mean to be Wesleyan (in the John Wesley sense of the word)?

Having earned an MDiv at Asbury Seminary decades ago, and having served on the faculty there now for 25 years, I have logged many hours in discussions and arguments about what it means to be Wesleyan, and about what sorts of commitments should be required for one seeking to join a confessional faculty like ours. So, which of Wesley's commitments have most impressed my colleagues and me as those we should be embracing? Here's my list of 12 such commitments:

1) Wesley was a man of one book, homo unius libri, or a "Bible bigot" as he once called himself. The Bible is the touchstone by which all truth, both in belief and practice, must be judged.

2) Wesley valued reason, tradition, and experience as the necessary lenses through which to interpret Scripture well;

3) Wesley was Arminian, convinced that God has sovereignly created and preserved human beings with a measure of (truly) free will, and has designed the entire process of salvation to require the real cooperation of the human will;

4) Wesley viewed the process of salvation optimistically, as the unfolding of grace in successive stages in this life, beginning with prevenient grace long before one's salvation, and extending ultimately to glorification in the next life;

5) Wesley viewed the human being as being perfectible, at least in a limited way, so that we can live holy lives free from willful disobedience to God, free from sin "properly so-called," being restorable in large measure to the image of God;

6) Wesley was convinced that all progress in the Christian life would come through the means of grace (particularly the Lord's Supper), that is, through the practice of specified patterns of behavior revealed to us by God as the ordained avenues through which divine grace flows to us;

7) Wesley was convinced that all progress in the Christian life must likewise come within the company of believers, as they press on together for God's very best in relationships of mutual accountability and intimacy;

8) Wesley was convinced that God desires every human being to be saved, and that God is constantly working (especially through the avenues of what we call Prevenient Grace) to draw all persons toward salvation. Our highest and most creative energies must be devoted to being involved in God's mission of calling all every human out of darkness and into God's full light;

9) Wesley insisted that poor and marginalized people be cherished and cared for in a variety of ways, and that his followers vigorously press to relieve their suffering in both body and soul;

10) Wesley was convinced that God desires to assure believers of their salvation through the Witness of the Spirit, relieving them of the terror of death and the fear of judgment;

12) Wesley urged that true Christians of all stripes foster the common bond they share in Christ, and that while differences among believers may require certain administrative distinctions, we must always cultivate a catholic spirit, always being ready to declare, "If your heart is with me, give me your hand."

So if anyone had said to me, "Yes, these are the very convictions by which I live," I would likely have replied, "Surely you are a Wesleyan (in the historic sense) of the highest order. You have embraced the core message of the great English Reformer!"

But Wesleyan scholars did more than shine a bright light on John Wesley himself. They reexamined the traditional Holiness message as it has evolved over these two centuries after Wesley's death, and to a large extent have called into question the validity of the Traditional Wesleyan Holiness teaching which had for over a century been promoting the experience of the disciples at Pentecost, as reported in Acts 2, as the clear and simple pattern for all believers to follow in seeking Entire Sanctification, "the Second, Definite Work of Grace."

As studies published in Wesleyan Theological Journal in 1978 suggest, it is problematic, from the standpoint of biblical exegesis, to claim that the outpourings of the Spirit at Jerusalem (in Acts 2), later in Caesarea (Acts 10) and then at Ephesus (Acts 19) are straightforward instances of what we Holiness People have called "The Second Definite Work of Grace." It is precarious to equate the status of those who were just about to be filled with the Spirit on these occasions (in Acts) with the status of justified-and-baptized Christians today. [Unfortunately we haven't the time to explore that here.] But no clear consensus has gathered around any compelling replacement paradigm for Entire Sanctification, and many scholars of Wesley appear to have moved (unfortunately, I say) toward promoting an exclusively progressive and incremental view of sanctification.

Now as one trained primarily in biblical studies and not primarily in Wesley studies, I stand indebted to the great wave of Wesley scholars who, especially over the last 50 years, have exposed the various contours of Wesley's thought. I value and admire them as guides for interpreting Wesley within his day and for our day. That is why I feel a bit vulnerable now, in venturing to talk about my own recent (re-)reading of Wesley. I could lose nerve here, but I'm going to charge ahead anyway!

About 4 years ago, owing to a series of factors I won't go into here, I decided to read through the entire 14-volume Jackson set of Wesley's works I had just received from the library of an elderly uncle. Until then I had read Wesley directly only sporadically, relying for most of what I knew about him and his thought on the writings of others. In other words, even though I felt I knew the substance of Wesley's thought fairly well, mine was largely a secondary knowledge.

But as I made my way through the 14 volumes, through the journals, all 150 sermons, treatises of various sorts, and letters, a strange thing began to happen to me. I found myself utterly surprised, even stunned, by what I read. Of course I found ample support for the 12 elements I've already listed above. They do indeed represent much of Wesley's thought, at least as I had perceive it over the years. But what I had not anticipated was another element, something spectacularly prominent, like a church steeple piercing the clouds to rise far above all of these other elements I've just named. I'm talking about love. That's right. Love.

Dr. Joseph Dongell is professor of biblical studies and director of Greek studies at Asbury Theological Seminary where he has served for over 25 years. He is an ordained minister in The Wesleyan Church.