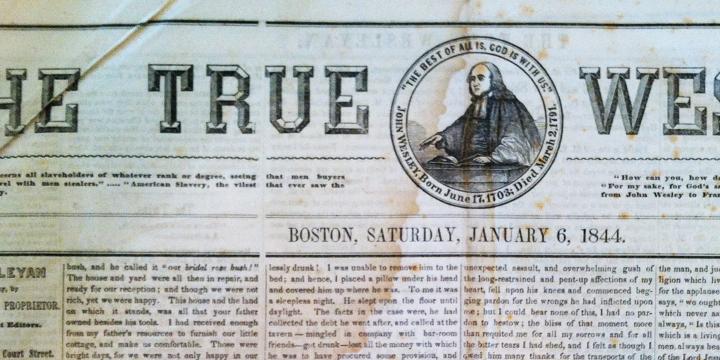 Created by Orange Scott, The True Wesleyan's primary focus centered on the anti-slavery movement. It was an weekly publication that has evolved over the years. Shortly after the Wesleyan Methodist Church began in 1843, the paper became the church's official news publication. From an anti-slavery paper, it began to shift its focus to a holiness publication, which was used by the Church to teach and educate its members in the theology of holiness. Today, it continues to promote and emphasize holiness among God's people. (General Editors)

On presenting our first number, to the inspection of an enlightened public, it is due alike to ourselves and to those to whom we look for patronage, that a full expose be given to the objects we contemplate, and the principles by which we shall be governed in promoting these objects. We say then, that our principal object, as our title imports, is to advocate that form of Christianity generally known as Wesleyan Methodism.

In thus explicitly avowing the advocacy of Wesleyan Methodism as our principal design, let it not be understood that we entertain uncharitable feelings toward other evangelical denominations. With multitudes of these, we have been , and still are, on terms of Christian reciprocity, and we shall endeavor so to remain. We find no fault with any man or body of men, for avowing and practicing according to their conscientious convictions of Bible Truth. We only claim the same right, a right which we most cordially award to others of presenting and advocating our own views of the same truth. Man has nothing to fear from the advancement of truth. By an arrangement in the moral universe, the true and the good are inseparable. We think, that we idolize no opinions, and we hold none that we could not cheerfully sacrifice upon the altar of truth. But that altar must be constructed of materials drawn from the Bible. Believing in its infallible inspiration, we hold our minds in perfect obeisance to its sacred teachings. Here we would sit at the feet of our divine master, believing it the most appropriate act of human reason, to receive with perfect submission, the teachings of God.

The real moral reforms of the age though in a sense subordinate to vital godliness, are nevertheless so closely allied to it, that the advancement of the latter is essential to the progress of the former. They are but the application of Christian truth to existing evils.

The Temperance Reform will have our most cordial co-operation. Finding as it does, a response in the laws of man’s physical and moral economy, its continued judicious advocacy, must result in the consummation of its triumphs. On the absorbing question of the day, our paper will be decidedly anti-slavery. - Orange Scott (The True Wesleyan, January 7, 1843. Vol. 1)

From 1853-1855, the Western Branch Book Concern created a 10-volume set consisting of “slave narratives" and sketches.