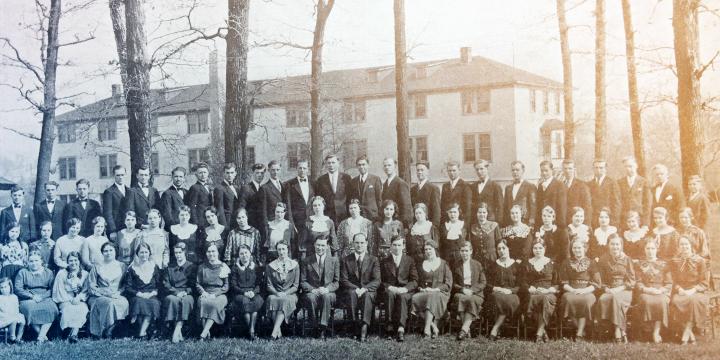 Dr. Wayne Caldwell, in Reformers and Revivalists (p. 398), has this to say about the importance of educational institutions in a denominational context: “…the educational institutions of a church determine that denomination’s strength of leadership, its theological direction and stability, as well as its lengthened shadow of influence over succeeding generations of people.” Wesleyan schools have, since inception, been offering an alternative to secular education by providing liberal arts degrees, ministerial preparation, and professional programs of study within the context of a Christian world view. Included is a brief historical description of each school and suggestions for further resources.

Houghton is the oldest established Wesleyan college. It was affiliated with the Wesleyan Methodist Connection when it began as a secondary seminary in 1883 in Houghton, New York. By 1899, some college classes were offered and the college department awarded its first diploma in 1901. Between 1937 and 1972, the college grew from approximately 300 students to 1,200. Since that time, Houghton’s programs have expanded to include baccalaureate degrees in 48 fields of study providing excellence in a liberal arts context. Houghton has been ranked in the top four percent of colleges nationwide according to America’s Top Colleges, compiled by Forbes and the Center for College Affordability and Productivity (CCAP).

See: A Vine of God's Own Planting: a history of Houghton College from its beginnings through 1972 bu Richard L. Wing. Wesleyan Publishing House, 2004.

In 1920, Marion College was officially established as a liberal arts college in Marion, Indiana. By the 1960’s, the institution was known as the one producing the most Christian workers for the denomination. With the addition of a successful adult education program in 1985 as well as the offering of graduate degrees in several fields, enrollment has increased dramatically to over 15,000 today. It is the largest private educational institution in the state of Indiana as well as the largest school in the Council for Christian Colleges and Universities (CCCU) and just recently (2009) opened a seminary.

In 1945, the Holiness Bible Institute opened under the auspices of the Reformed Baptist Church in Woodstock, New Brunswick, moving two years later to Yarmouth, Nova Scotia. The purpose of its establishment was to provide ministers for churches in Atlantic Canada. Since that time and after another move to Sussex, New Brunswick, the school’s curriculum has expanded to include a variety of ministerial programs. Graduates serve as pastors, missionaries, Christian school teachers, and counselors in many parts of the world. In 2011, the school was renamed Kingswood University. Since that time, a graduate degree in Pastoral Theology has been added to the curriculum.

Southern Wesleyan University was established in 1906 under the name Wesleyan Methodist Bible Institute in Central, South Carolina. The southern conferences of the Wesleyan Methodist church had been planning to build a Christian school to serve their population for some time. The school was renamed in 1959 as Central Wesleyan College with a final name change in 1994. Since that time, Southern Wesleyan University’s enrollment has doubled. It now offers over 30 bachelor degree programs, 4 graduate degrees, and an adult education program.

Cass Ramey spent years in shame and depression. But God was not done. Read his story of being made new.

The annual Christmas carol sing at Kingswood University is always an anticipated event.

Dr. Everett Piper accomplished much in his six-month sabbatical, including studying abroad and finishing his latest book.

In two years' time, more than 40 SWU student-athletes have been discipled through Campus Outreach.

Elections and who we are

IWU President David Wright reminds us who we are, what we value, and what we are called to do in light of this year's election.

A different kind of college student

A college dean is proud of the students at his university for their decision to speak differently.

Since the passing of Justice Antonin Scalia, and the possibility of a deadlocked court on key decisions in June, little has been said about what actually happened in this case. But there is hope.

Religious freedom and civil rights testimony before the Indiana Senate

President Wright’s full testimony before the Indiana Senate, followed by his commentary.

11 things I learned at Kingswood University

Alecia da Cruz talks about the lessons she learned while a student at Kingswood University. And the lessons are things we can all take into consideration.

The road I would have never asked to walk

One Houghton alum and her family never would've asked to walk the road God has placed them on. But they continue to walk with Jesus one footstep at a time even when they don't understand his ways.