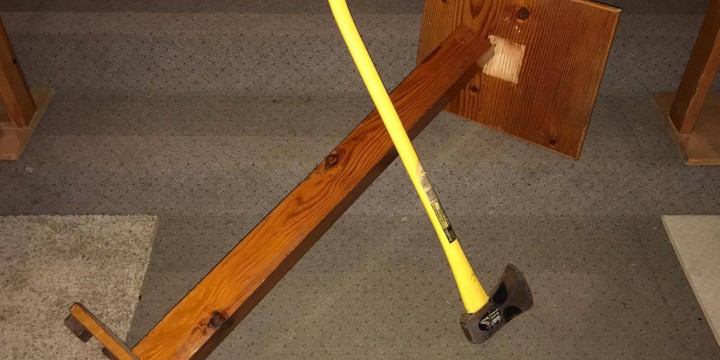 Stories have been floating around about a certain bearded preacher who used an axe to cut up the pulpit on stage at a camp meeting. I'll confess--it was me. I should explain the context before the rumor mill gets out of hand:

At first the axe was just a prop to talk about the gravity of sin and Romans 6:23. But, I shared a story about how I had seen two women, a mother and grown daughter, cussing each other out while I was on my way to study at a coffee shop for that message. They were using all kinds of words about each other and just ripping each other apart in the most fierce and personal way. Clearly these were people that needed a loving and peaceful person to step in and calm things. As inconvenient as it might have been to my day, God put me there in that moment to respond to that need.

However, like the religious leaders walking past the beaten man on the side of the road to Jericho I walked right by them, thinking of all I had to do that day, and wanting to avoid the conflict. None of my business: I told myself. I was going to be up in the pulpit just a few hours later, and I needed to get that sermon ready, so I failed to deliver the most important sermon needed that day.

As St. Francis of Assisi said, we must "preach by our deeds."

I was gripped by conviction on this. Those ladies (and their bystander boyfriends in the cars) needed me to bring the gospel into their situation, but all I cared about was the pulpit.

So as I was under this conviction, I asked questions of those gathered, perhaps about 700 that Friday night, about whether we really care about those who need Jesus, about whether we really believe that we have eternal life and those people matter more than other things like sermons and camp meetings and even the pulpit. In order to make this point, I lifted the axe above my head and cut sharply into the top of the pulpit and didn't say anything for what felt like about the longest 60 seconds of my preaching life.

Nobody moved an inch or made a sound. I think they got the point. I may have even channeled a bit of old-time preacher in me as I expressed a little of what I hope was righteous anger at myself and all believers who care more about a supposedly holy pulpit than the actual souls around us who we want to know Christ personally. I then kicked the pulpit off the platform, and it ended up on the ground by the altar, smashed to pieces.

Perhaps I went a little too far; I don't know. What do you think?

My take: that pulpit, in the end, is just wood. Eternal souls are what really matter, far more than the sermons that are preached behind such a pulpit. I needed to make that point and make in a way that people remembered long after forgetting the cleverly-crafted points of my message (which are usually long-gone within hours).

To be honest, I thought I would get a huge push-back from people that night. This is the "holy ground" place where people come every year to hear sermons. But I did not get one person challenging this prophetic action to echo the prophetic words of Christ--instead, they got the point, and instead committed their lives to responding to the message in the following way:

The crowd gave me 403 names to pray for of those they want to see come to Christ, committing to behave in such a way to make the lost a priority every week...

2 came to believe in Christ for their first commitment in their lives.

27 more made a commitment on Sunday night to "Be Sanctified," and countless others committed to "Be Sent" on a mission. So, I believe God moved.

May you and I learn the way of being inconvenienced by the gospel, and following the call to be men and women of peace-making and restorative gospel-living in a broken world that needs the transforming eternal life of knowing Jesus Christ!

David Drury is the Chief of Staff to the General Superintendent, serving to guide the vision, key message, and missional priorities of The Wesleyan Church.

Church leaders learn before long that attendance is only meaningful if you can drive engagement.

David Drury's stories in Being Dad will not only cause you to think, they will give you concrete ideas for how you can be a dad who makes a positive difference in your children's lives.

When someone questioned Mary Slessor as to how she could do great feats because she was "only a woman" she reminded him who God was.

​The 6 Bs of evangelism

Rev. Wes Dupin unpacks why evangelism is something everybody can do.

The word I had never heard

Jim Dunn heard a new word in fourth grade, something he wasn't sure was okay to say. Now he encourages us to view that word as an opportunity to share Christ this Easter season.

When we know we are one day closer to eternity than we were yesterday, how then shall we live? Jim Dunn examines what it means to live with purpose as the clock continues to run in each of our lives.

Josh McNall is a professor at Oklahoma Wesleyan University. In his new book, he describes challenges of communicating Christ outside our cultural niche.